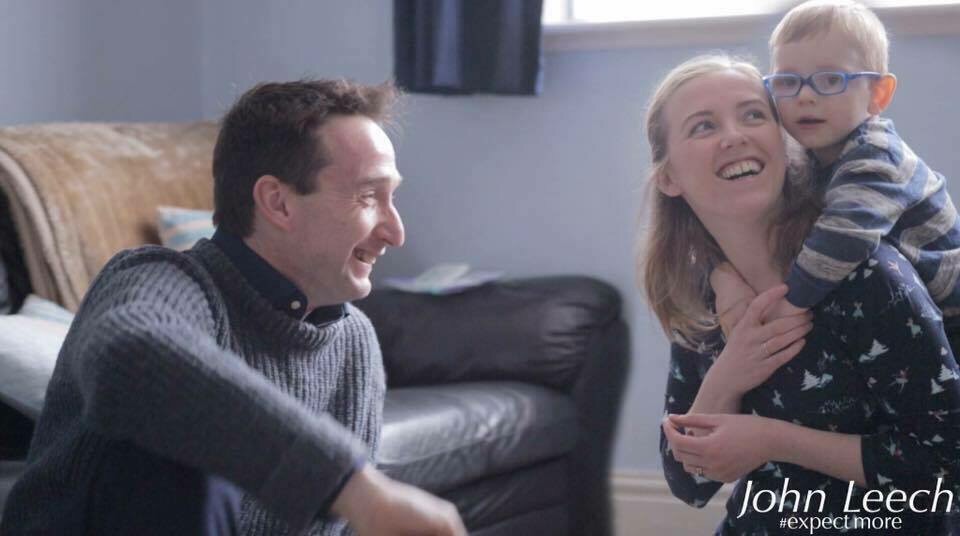 I first contacted, my MP John Leech, about Mike’s feeding therapy back in August 2013. It was after five months of hearing nothing back, not even an acknowledgment, from the Clinical Commissioning Group, about the treatment I so desperately wanted for my boy. There began a relationship, that changed the course of my family’s future. Especially Mike’s.

I jumped at the chance of speaking about what John did for us, at his recent campaign launch for the 2016, local elections. I was really, really nervous but I shoved my nerves to one side because I truly believe that John needs a place back on our council. He cares too much to not be representing the city and people he loves.

It struck me that people don’t know how much he went that extra mile for me and Mike, so now is as good a time as any to retell our remarkable tale.

Michael is my second child and was born in March 2012. From the moment I went in to labour it was clear there was something up. By the time he was three days old, Michael had been diagnosed with Congenital cytomegalovirus or CMV.

CMV is a usually harmless, cold virus that most of us catch before our fifth birthday. I caught it however for the first time in pregnancy.

A first infection can harm a developing baby in the womb and is one of the biggest causes of childhood disability – even more children affected than Down’s syndrome. Michael was one of the small numbers of babies born symptomatic in the UK, every year. He was treated with chemotherapy drugs in the first months of his life, in an attempt to reduce the harm this virus could cause him. Saving his hearing being the main one.

Mike’s life has never been normal, and I’ve had to jump from one specialist to another and have become expert in the health and development of my little boy.

Trusting in that though, hasn’t always been easy.

Offering Mike his first solids at six months old, was like opening a big can of worms. He suddenly became a baby who cried uncontrollably day and night. He would wretch at smells, scream at sights and no matter how hard I tried he just couldn’t take the food in his mouth.

Every professional I approached told me that he was just taking time to adjust while praying that really was the case.

Nobody had a clue what to do.

A child like Mike, even in the world of special needs kids, is really unusual and we were all so confused about what was right for him. So confused it left every professional working with him, unable to make a decision on what was best for him. His well being suffered.

I knew it was so much more than taking time to adjust but nobody listened because they had no answers either. We went for months and months presenting our son to doctors and specialists. His growth and development completely stalled for a year.

He’d spend all day and night banging his head off anything he could find and his life was spent in waiting rooms and in the hands of doctors and therapists who couldn’t agree on a treatment pathway. I was desperate for him to be nourished, whatever it took as Mike was painfully thin and unhappy.

Children like Mike who don’t eat, are usually tube fed but because he simply wasn’t developing feeding behaviour there was a big worry we’d tube feed him and he’d become tube dependent and never learn to eat.

I was fascinated to discover babies don’t learn to feed instinctively. They have to learn just like walking, talking and every other skill.

We’d been made aware of a specialist treatment at Midlands Psychology by mike’s feeding speech therapist.

Midlands Psychology & Clarissa Martin have a 100% success rate in getting kids like Mike to feed enough, orally.

Treatment wasn’t however available on the NHS. I had to apply through our CCG, or clinical commissioning group for funding. It was a complicated process that even my GP said, they weren’t sure of. It left me navigating more systems in the NHS while juggling a child with complex needs.

Mike was left hungry for well over a year.

It took a vomiting bug and admission to hospital before a decision was made, against my wishes, that all we could do now was tube feed Mike. A tube was subsequently put down his nostril, in to his tummy and we were taught how to feed him safety with prescription milk feed.

For a little boy who doesn’t cope with things touching him, or near his face this was awful.

I at this point had to concentrate on nursing my sick and frail two year old back to health, I had a four year old too, whose life was just as turned upside down.

It was then, that John really stood out to me.

Very few people believed in me while I’d been attempting to be heard about the treatment I wanted.

Councillors had turned their backs and doctors had washed their hands of him, too worried about committing to an opinion and getting it wrong.

But we had no options.

Before Mike had become really ill, I contacted my local MP, John Leech.

We’d been back and forth for months in discussion with the CCG and I don’t think any of us believed things would be allowed to escalate as they did for Mike. When they did, I couldn’t fight the CCG anymore.

It was relentless and Mike needed me to nurse him.

That’s when John took the reins and argued that as a mum, who had fought so hard, I deserved the right to this treatment for my son.

We had to give it a go because mum believed in it and she knew best.

John stood firmly in this viewpoint.

I’ll never forget reading John’s communications with the CCG. I wasn’t alone in this fight.

Isolation has got to be the toughest emotion in special needs parenting, so that hand out to me form John, spoke volumes and touched my heart.

We had to do this for Michael and for me, he deserved to see was this therapy going to work and avoid a life of tube feeds and no pleasure in eating.

From the start it was obvious John cared and wanted the right outcome for my family. And the only thing that changed throughout my experience was that John’s passion for what I needed increased. John and his team really stood up for me, he actually listened to me when I was shouting at brick walls. Even I didn’t really know what I was shouting for at the time, but he believed in me.

John understood the systems I was fighting against and was prepared to wear his heart on winning me that battle.

Because it’s what Mike needed and it’s what we deserved.

I am now immensely proud that I can publicly show our support and say thanks to John for listening to me, supporting us and getting Mike what he needed.

We want everyone to see what John did for us.

He really is one of a kind and it is only now I see and understand that we’ve completely altered Michael’s natural course of neurodevelopment.

Scientists explain what we’ve done and it’s clear that without the treatment John helped me get, Mike’s brain would have taken years, if ever, to strike the connections it has.

He’s learned to talk and walk and is attending mainstream school with support. He’s such a social little boy, it’s hard to ever imagine that little personality trapped inside a tired and poorly body.

John believing in me was the right thing to do.

I don’t know what we would have done and it would be an absolute travesty if he was not elected to council this year, after everything he has done for us.

Because somewhere  in Manchester there will be another family who isn’t being listened to. Another mum, or dad, who needs that backing.

Somewhere, there’s a mum just like me who needs John Leech to fight for them and for what’s right. I know, because I see families all over the country not getting this treatment for their children.

People love to tell me John was just doing his job. I believe it’s more than that, he wears his heart on this city.