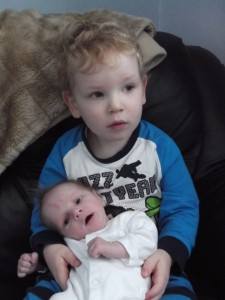 Big brother was two and seven months when Mike was born.

My thoughts of having two babies hadn’t ventured much further than the cuteness. The reality was lots of that, but equally there was a lot of tough times too.

Before Mike had been born, big brother and I had got up to all sorts of fun every day, just us and our toddler friends pottering around.

I felt so lucky.

My labour began at midnight and Mike was born, just before 7am. Daddy was back home as big brother woke, to tell him the news.

Life couldn’t have got more perfect.

Thing was, everything changed.

We left this image of ‘perfect’ in the distance.

Mike being diagnosed with Congenital CMV changed me as a mum and as a person completely forever. Literally in an instant. I was never the same Rebecca again.

I was still big brother’s mum of course, but I had a poorly baby now and he needed me. More than anyone could have ever needed me or will ever need me. I couldn’t stop that.

Mike and I were separated in the days after he was born for the sake of infection control. I allowed no visitors to Mike but Daddy and big brother. About the only thing that gave me a tiny drop of comfort, was imagining big brother there with baby brother. We were connected and it was the closest I could possibly be to my newborn, within the concrete walls that separated us.

My husband said big brother would run to the neonatal unit and count the “Baby Mikes” in incubators. I love that image. He was clueless as to the situation and this was just his norm, of welcoming a baby brother.

Returning home we were live in, in patients at the hospital. I was permanently attached to my breast pump or doing skin to skin to promote breast feeding as Mike couldn’t suck, or at the hospital doing the same. Mike was continually prodded and poked and all I needed to do was look after him.

I felt so guilty but this little baby needed me and I was compelled to do the best for him, whatever it took. So the toddler’s needs had to be taken care of by family.

The toddler also missed out on his usual activities because the baby had no immune system and we needed to stay indoors.

The toddler came to the odd appointment, to keep things ‘normal’ and saw things that I didn’t want him too. But that was how it was for his brother so we all just had to get along, embracing and accepting.

My heart was absolutely broken.

The heartbreak for big brother continued. He’d see me sad, he’d see me frustrated, he’d see me desperate and lonely. He above anyone knew my heart was broken. Yet his two year old self always had the expectation I’d meet his needs and be his mummy, he remained my only constant in this world of mine that had changed completely.

I loved being his mummy. It was the only normal thing in my life. At times I’d look at him and see him clearly, while everything else around him was just a blur.

As time went on I felt so lucky we didn’t have a jealous toddler. That we’d figured it out. More time went by and we saw how big brother was so sensitive to other people’s feelings and needs. I arrived home only the other day, from an hour out of the house, to him giving me a run down as to what Mike had eaten while I was gone. He was contemplating what a good food choice would be for Mike next.

Exactly as my mind works.

I didn’t ask him, I’ve not taught him, he just knows it because it’s his normal. He also knows what I need to know, to be happy.

If Mike has a sensory overload he understands it’s home time or the right way to calm him.

When Mike runs away, he waits while I catch him. He’s never questioned why his little brother gets chips and chocolate for tea and he doesn’t.

Big brother doesn’t hold back in cleaning up sick and helping Mike with the toilet. He wants to do it. It’s his normal.

They don’t hold back in falling out, just as brothers do either (unfortunately!)

Before he fell asleep one night recently he asked me, “mum you know Mike is nearly six, why is he so small?” I knew he was hinting at more than just small in size, but an eight year old doesn’t have words and emotion to cover that. Nor could he really explain what exactly he meant. It was like a realisation had suddenly hit, that maybe all the big words, all we do extra for his brother are for reasons he’s only just becoming aware of.

Thing that struck me most, he’ll always be just a little brother to him. So brings me back to lucky, lucky I have children like mine.